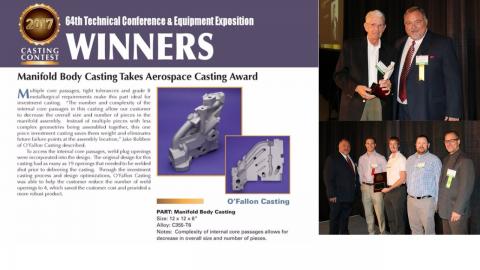 The 64th Annual Technical Conference & Equipment Expo was held by the Investment Casting Institute on 10/15-10/18 in Covington, KY.  It included presentations from over 20 industry leaders, a keynote address, three panel discussions, an awards ceremony and an equipment expo with more than ninety exhibitors displaying the latest industry products and services.

On the first day of the show, O'Fallon Casting was well represented in the awards ceremony. The awards ceremony started with O'Fallon Casting being announced as the winner of the aerospace award for the 2017 Casting Contest.  O'Fallon's entry was a manifold body casting for an aerospace application.  The casting included multiple linked core passages, tight tolerances and grade B metallurgical requirements.  See more about OFC's winning casting here.

Also during the awards ceremony, O'Fallon Casting's Barry Hadley accepted Frank Valenta's posthumous induction into the ICI's Hall of Honor.  Barry and Frank were colleagues for many years in the investment casting industry, working together to help modernize the industry.

On the second day, OFC's Taylor Thornhill was part of a panel discussion involving the permeability of investment casting shells.  The panel discussed what permeability is, why it is important and how it can be adjusted and controlled.

On the third day, OFC's Vince Gimeno gave a speech on plant modernization, discussing challenges that arise and overcoming obstacles by coming together as a team.