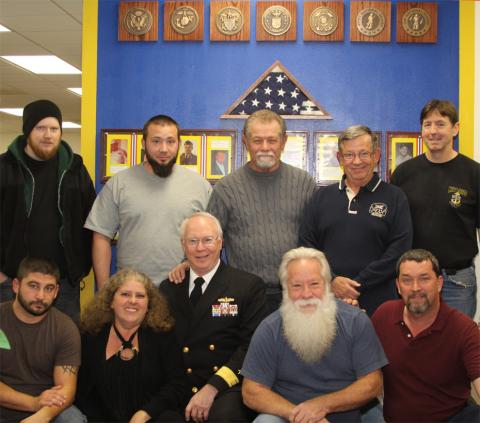 O’Fallon Casting recognized its Employees who are Veterans of the United States Armed Services with a dedication of the Company’s “Wall of Heroes” in ceremonies held in O’Fallon on Friday, November 14, 2014. Admiral Lee Metcalf (USN-Ret.) the Missouri State Chair for the Employer Support of the Guard and Reserve (ESGR) was the honored guest who presided over the ceremonies.  Other Dignitaries in attendance were Missouri ESGR Area 1 Chair, Dave Woolley, and Program Support Technician, Brandy Scheer.

Ten O’Fallon Casting employees, Veterans that have served the country from Vietnam thru Afghanistan, were the Honorees at the dedication.  Admiral Metcalf presented each of the Honorees with an ESGR ceremonial coin to commemorate the event.  O’Fallon Casting also presented its distinguished guests with engraved bronze statuettes of its “Casting Excellence Man”.

The O’Fallon Casting “Wall of Heroes” displays “Then & Now” photographs of each of its Vets and is emblazoned with Service Medallions of each of the country’s armed services and with a U.S. flag that was flown in Kandahar, Afghanistan on September 11, 2014.

Festivities included a reception luncheon for the Admiral with the Honorees followed by a tour of O’Fallon Casting.  The formal unveiling of the Honor Wall and its dedication was then performed by Admiral Metcalf.  In remarks to the gathered O’Fallon Casting employees Admiral Metcalf applauded the company for its contributions to both its community and to the country and thanked it for its continuing efforts to employ returning servicemen and servicewomen.

In April of 2014 the State of Missouri had previously awarded O’Fallon Casting its“Show-Me Heroes” “Flag of Freedom” in recognition of OFC’s commitment to the hiring of returning veterans.

O’Fallon Casting also commemorated this occasion with a renewal of its Pledge of Support for the Guard and Reserves.